Hercule Poirot is a fictional Belgian detected created by the English writer Agatha Christie (1890-1976). He appears in 33 of her novels, 2 plays and more than 50 short stores published between 1920 and 1975, making him one of Christie’s most long-running characters.

The first Christie story featuring Hercule Poirot is The Mysterious Affair at Styles, published in 1920. The last one is the 1975 novel Curtain, in which he dies.

As early as the 1930s, Christie herself admitted to finding her detective “insufferable” and by 1960 she described him as a “detestable, bombastic, tiresome, ego-centric little creep”. The public loved him, however, there was always a demand for more stories about the clever Belgian.

The stories about Poirot have been adapted for other media and the detective has appeared on radio, television and in films over the years, portrayed by various actors. 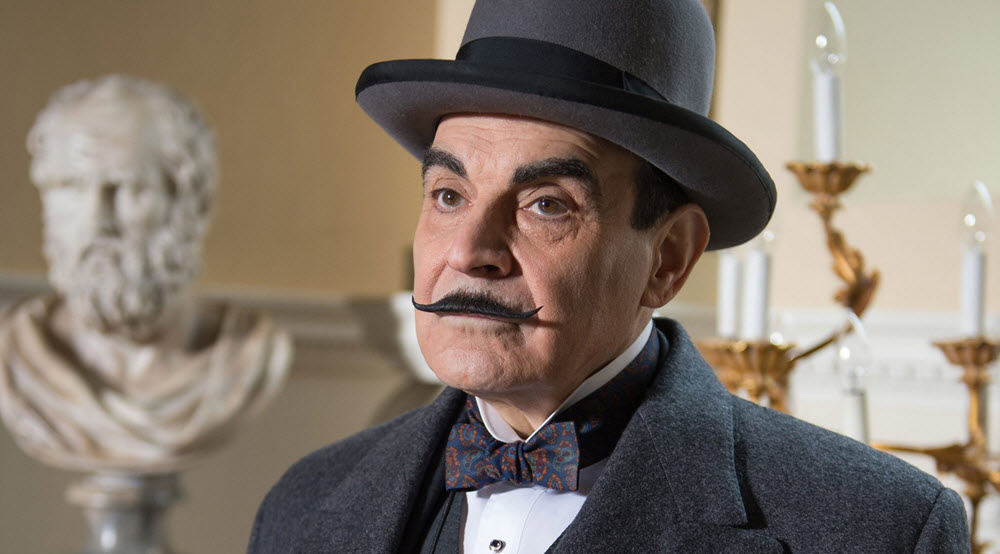 Why is he called Hercule Poirot?

This is how the character Captain Arthur Hastings describes Poirot:

“He was hardly more than five feet four inches but carried himself with great dignity. His head was exactly the shape of an egg, and he always perched it a little on one side. His moustache was very stiff and military. Even if everything on his face was covered, the tips of moustache and the pink-tipped nose would be visible. The neatness of his attire was almost incredible; I believe a speck of dust would have caused him more pain than a bullet wound. Yet this quaint dandified little man who, I was sorry to see, now limped badly, had been in his time one of the most celebrated members of the Belgian police.”

Poirot is fastidious about his clothing and personal grooming, and he is also extremely punctual.

He prefers to keep his bank balance at exactly 444 pounds, 4 shillings, and 4 pence.

Poirot is fond of classical music, especially Mozart and Bach. This is mentioned in The Clocks and Curtain.

From physical clues to psychological insights

In The Mysterious Affair at Styles, Poirot is depicted as a logical and analytical detective who is great at noticing and understanding clues, even miniscule ones.

In Murder on the Links, Poirot begins to establish his psychological bona fides. Instead of chiefly relying on physical clues, he makes inquiries to learn about the nature of the victim and/or possible culprit.

Even in the early stories, Poirot is always good at making people talk, and in several early stories he refers to himself as “Papa Poirot” – a person to confide in.

In her later stories about Poirot, Christie often lets her detective lie or give out misleading information about himself to dig out information pertaining to the case. In The Murder of Roger Ackroyd, he claims to have a mentally disabled relative to obtain information about care homes for such individuals. In Dumb Witness, he investigate local nurses by claiming to have an elderly mother in need of care. In The Big Four, he goes a step further by inventing an identical twin brother named Achille.